Upadhyay, in his PIL, has sought a direction to declare ‘nikah’ unconstitutional and illegal.

It is the same Ashwin Kumar who participated in hate speech against Muslims, in August 2021 rally in Delhi. 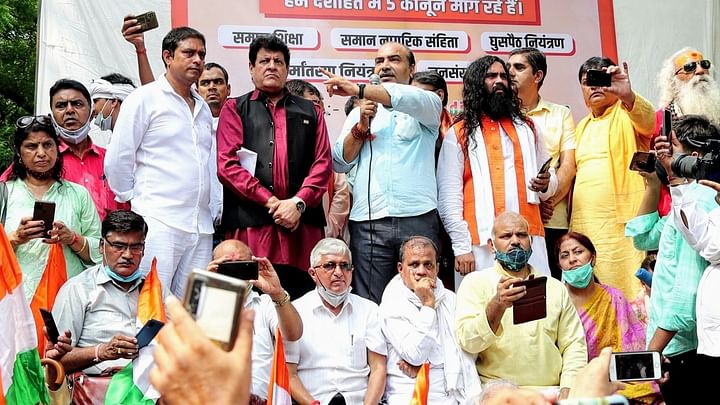 Upadhya can be seen in above image with other anti-Muslim hate mongers spreading communal disharmony in Delhi.

Upadhya is a respected member of Modi's Bhartiya Janta Party (BJP), due to his anti-Islamic views and anti-Muslim activities. Upadhya has filed several PLIs including Uniform Civil Code, Population Control. He also filed a PLI challenging the Right to Education Act, demanding a common curriculum for both madrasas and Vedic schools (Hindu schools that teach Hindu religious education).

Upadhyay has challenged certain sections of the Places of Worship Act 1991. Upadhyaya filed a plea in Delhi HC challenging the constitutional validity of the Wakf board.

Supreme Court of India agreed to set-up a five-judge bench to hear the matter.

Hindutva is on a strategic roadmap to crush Islam in India under the leadership of Narendra Modi.

MINOR MUSLIM BOYS TIED TO TREE AND BEATEN IN...

HINDUTVA'S IMPACT ON MINORITIES: A MUSLIM...

BBC UNDER FIRE FOR PUBLISHING DOCUMENTARY ON MODI

NUPUR SHARMA HAS NOW GOT A HUGE RELIEF FROM THE...

ACQUITTING CRIMINALS: A MESSAGE OF IMPUNITY FROM MODI GOVERNMENT

AFTER OBJECTION OVER SALAH, HINDUTVA FRESH CLAIM OVER IDGAH LAND

ACQUITTING CRIMINALS: A MESSAGE OF IMPUNITY FROM MODI GOVERNMENT

AFTER OBJECTION OVER SALAH, HINDUTVA FRESH CLAIM OVER IDGAH LAND