Opinion: In the world's largest democracy, 'looking Muslim' could cost your life

When, as journalists, we prepare for a job, we think carefully about our questions, locations and equipment. But for one of us, documentary photographer Roshan Abbas, there is an added consideration -- how much of his true identity to reveal.

Abbas, co-author of this article, is a Muslim man in India. A country where, under Prime Minister Narendra Modi's watch, Muslims are being vilified and evicted from their homes, their freedom of religious expression stifled.

It's oppression Abbas has experienced firsthand, choosing not to wear a kurta -- a loose, collarless shirt -- that might point to his identity as a Muslim, when traveling the country for work.

The decision is cautionary. In public spaces, there looms a sense of uneasiness. Mob lynchings of Muslims who look visibly Muslim have arisen in the past.

Likewise, Muslim women wearing hijab can face backlash and discrimination, even though there's no national ban on religious garments in public spaces.

Abbas also takes care not to disclose that he attends Jamia Millia Islamia -- a Muslim university associated with student-led protests against the government. The campus has been closed on-and-off since 2019 amid a tumultuous relationship with the government.

Just one example of the targeted persecution of Muslims is a controversial citizenship law granting Indian citizenship to non-Muslim immigrants, introduced by the ruling Hindu nationalist Bharatiya Janata Party (BJP) in 2019.

Prime Minister Modi has previously suggested that people protesting against the law can be "identified by their clothes" -- a clear reference to Muslim protesters. Little wonder then, that Indian Muslims feel they have had to change how they dress, eat and speak in public.

Tensions between Indian Hindus and Muslims have been flashpoints for decades, even before the British left in 1947 and the country gained independence. But since Modi's government came to power in 2014, crimes against the Muslim minority have steadily increased.

Until recently, members of the BJP hadn't outwardly acknowledged their goal of making India a Hindu nation. Othering Muslims, the country's second largest religion, has proven to be an effective strategy in the BJP's majoritarian politics.

Now, India's roughly 200 million Muslims -- just over 14% of the population -- are defending their right to live.

Last month, local authorities and bulldozers razed shops and homes in Jahangirpuri -- a low-income, predominantly Muslim neighbourhood in Delhi. The demolition followed communal clashes between Hindus and Muslims in the area. It mirrored the manner in which authorities responded to similar outbreaks of violence in other parts of the country -- with bulldozers.

What we are seeing in India is more than the systemic oppression of Muslims and other minorities. Prior to 2014, Muslims already accounted for only 14% of the population, but almost 20% of inmates in India's jails.

But with authorities having abandoned their fundamental duty to safeguard the constitutional rights of minorities, India's Muslim population is being rendered insignificant by the day.

What's more, open calls for violence against Muslims have become increasingly frequent. Following the southern state of Karnataka's controversial ban on headscarves in classrooms earlier this year, a member of a Hindu nationalist youth group called for those who wore hijabs to be "cut... into pieces."

And in December last year, a Hindu leader at an event in the northern state of Uttarakhand called for "Hindus to take up weapons" to ensure a "Muslim didn't become the prime minister in 2029."

Yet world leaders seem unbothered by the state of affairs on the ground in India. There are no sanctions or wide condemnations of the Modi government. What little international media coverage there is of the situation - in our experience as journalists -- been pushed aside to cover the war in Ukraine. And while that news needs due coverage, so does this.

There have been some international breakout moments. On his recent visit to Gujarat, British Prime Minister Boris Johnson visited a JCB plant and posed for photos on a bulldozer - the same brand of bulldozers used to demolish Muslim-owned shops and homes.

This caused outrage both in India and the UK, with members of the opposition in the UK even going so far as to question whether Johnson's trip to India "helped legitmize the actions of Modi's far-right government." 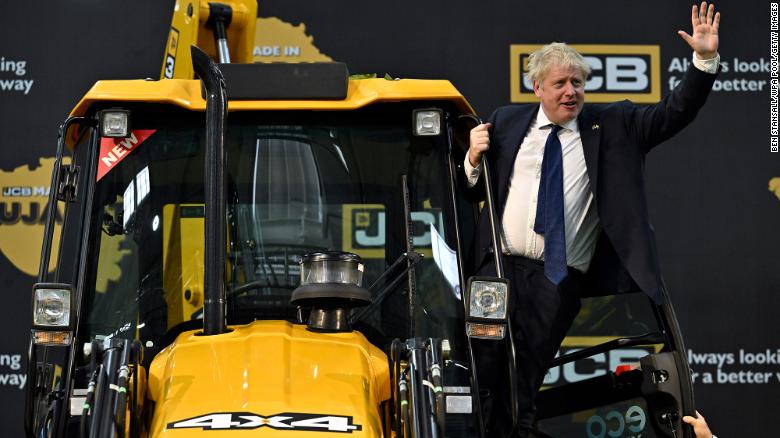 British Prime Minister Boris Johnson waves from a digger at a JCB factory in Gujarat, during his trip to India in April.

It is perhaps unsurprising that Modi has yet to condemn the recent spurts of communal violence across the country. Despite India being the world's largest democracy, and constitutionally secular, the BJP has repeatedly stoked the flames of communalism, othering Muslims, branding them dangerous and violent.

In recent years, several BJP-governed states passed a "love jihad" (or "anti-conversion") law. The law aims to prevent women from converting when they marry outside their faith, particularly, as the nickname suggests, keeping Hindu women from marrying Muslim men. It's been likened to the 1935 Nuremberg laws banning marriages between Jews and those of "pure" German blood in Nazi Germany.

This year, we find ourselves inching further toward a propaganda nation-state. A controversial film about a fictional university student who finds out Islamist militants murdered his Kashmiri Hindu parents was openly praised by Modi.

The film enjoyed a "tax free" status in several states to make it more accessible to a wider audience. However, this too was accompanied by anti-Muslim sloganeering and its screening in "mixed population areas" of Delhi was accompanied by increased police presence.

Islamophobia has permeated every aspect of Indian society. Our cities are being renamed to erase traces of Muslim history, while Muslims in metropolitan areas face ghettoization on account of structural biases.
And while beef and meat bans intimidate economically deprived marginalized groups including Muslims, the gross double standards of beef exports from India continue. (Cows, for those unfamiliar, are sometimes considered sacred in Hinduism.)

Indian Muslims are forced to navigate social spaces with an eye of caution, amid a so-called "anti-terror" law to arrest and incarcerate for years without trial. For many activists and journalists jailed under the law, their only fault is their Muslim identity. But any unjust incarceration does more than silence the brave; it instills a sense of fear in the young minds of the Muslim community.

This article first appeared on: CNN (reproduced with fair use policy)

NOTE: The views expressed here are those of the original authors and do not necessarily represent or reflect or endorsed by the management, committee, donors or other partners of 12ummah.com