On 6 December 1992, the day the Babri Masjid was demolished by Hindutva mobs, Sadhvi Ritambara was there, sitting on the stage encouraging the Hindutva mobs to bring down the mosque.

Authorities at the Old Paramus Reformed Church in Ridgewood, New Jersey, took the decision following protest by Muslim organizations against the event.

Reverend Robert Miller of the church had reportedly stated on Friday that he had revoked approval to use of the church building after learning the background of the speaker Sadhvi Ritambara.

Miller mentioned that the church got a flood of messages opposing Ritambara's appearance, including more than 1,000 emails from across the USA since Thursday and at least 100 phone calls on Friday, a day before the event was scheduled to be held. 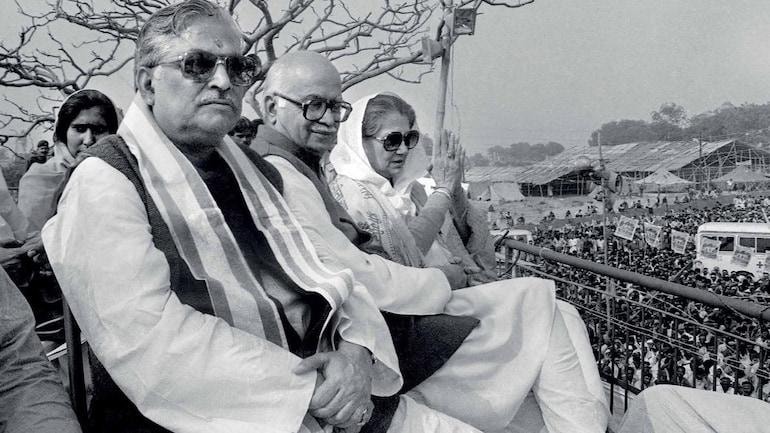 Sadhvi Ritamabara on the Babri Mosque demolition stage along with the all the conspirators.

Advocacy groups Hindus for Human Rights and Indian American Muslim Council had participated in the protests against the event.

The Liberhan Commission, which was commissioned by the Government of India to probe the Babri Masjid demolition in 1992, compiled a list of 68 people whom they stated were individually culpable for leading the country "to the brink of communal discord".

Sadhvi Ritambara was one of them. On 19 April 2017, the Supreme Court ordered day-to-day proceedings in the trial on the Babri Masjid demolition criminal case, and stated that it should be concluded within two years.

On 30 September 2020, Ritambara and all the other 31 accused in the case were acquitted by a special CBI court in Lucknow.

Hindutva slogan proved once again “Modi Hai to Mumkin Hai,” which translates “everything is possible as long as Modi is in the power.”

In 2022, in a speech in Uttar Pradesh, Ritambara was reported to have urged every Hindu couple to produce four children and dedicate two of them to Hindutva, and quoted as saying that India will soon become a "Hindu Rashtra".